“What we call the beginning is often the end. And to make an end is to make a beginning. The end is where we start from.”

I love new beginnings, but it helps me to frame them as T.S. Eliot does – as part of a continuum; the snake biting its tail. Blank pieces of paper and clean slates are a little intimidating. In the end, all there is to do is to begin. The end is the beginning. I’m almost at the end of writing songs for a new album. I have, as always, a foggy idea what it should sound like, but a lot of things will happen along the way to change that. Everyone involved will leave his or her mark, and it will (I hope) be a beautifully imperfect reality as opposed to an impossibly perfect idea. Most of all, I’m looking forward to being in the studio again – it energizes me being around great musicians.

I’ve got a lot of other irons in the fire for this year, too, but I’m making this newsletter brief so we can all get back to our New Year’s resolutions. Mine is to get this album done – wish me luck!

We just wrapped up an amazing weekend at the 30A Songwriters Festival, which boasted a stellar lineup this year: Rodney Crowell, Dar Williams, Emily Saliers, Vienna Teng, Mary Gauthier, Lucy Wainwright Roche, Shawn Mullins, Madison Violet and many, many more. Highlights for me were last night’s set with Emily Saliers, Mary Gauthier and Jennifer Knapp, catching Rodney Crowell’s riveting set just before my in-the-round set with two of my favorite guys, David Olney and Tommy Womack, and Barry’s and my solo turn at the Seaside Rep, a pretty little black box theater in the heart of Seaside. Make plans next year to spend MLK weekend at this event; mark my words, it’s going to get HUGE.

For the third year in a row, I’m proud to be hosting a benefit for Planned Parenthood of Middle Tennessee. Past guests have included Janis Ian and Marshall Chapman. This year I know tickets are going to sell out very quickly because my special guest will be my Wine, Women & Song GF Matraca Berg. We’ll be at the Rutledge in Nashville on March 3rd, swapping songs, stories and some laughs. Matraca’s new album is coming out this spring and it’s a beauty. Don’t miss this very special, very intimate evening and the chance to hear these songs, new and old, up close. A VIP ticket gets you priority seating and a meet & greet with the artists before the show. All ticket information is at my website.

And speaking of Wine, Women & Song – Suzy, Matraca and I will be taping our first DVD on February 24 in fabulous downtown Leipers Fork, TN, home of Green’s Grocery, where we first sang together 11 years ago. We will be giving away a very small number of seats to this invitation-only event, and you can get in on it by going to our Facebook page and following the instructions there. These seats are non-transferable and can’t be sold, so please participate only if you are able to attend. Watch our Facebook updates for more.

Due to the popularity of the semi-regular “in the round” shows with Janis Ian, Craig Carothers, Tony Arata and myself, we’re embarking on our first world tour! OK, maybe it’s just Decatur, GA & Nashville, TN, but it’s a start. We’ll be at Eddie’s Attic for 2 nights September 1 & 2, finishing our little mini-tour with a night at the Bluebird Cafe in Nashville, TN on September 3. Tickets for Eddie’s will be on sale at the Eddie’s Attic website in mid-January. Tickets for the Bluebird show will be on sale the week before the show. Hope to see lots of you there! 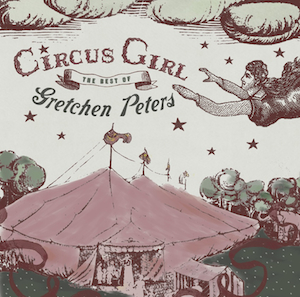 CMT has released “The Greatest Greatest Hits of 2010” list, and Circus Girl: The Best Of Gretchen Peters is on it! An excerpt: For the thinking country fan interested in looking behind the industry curtain, this set is a dream. Read all about it here.

Just a reminder: if the caption above makes sense to you, you can follow me at the links below:

Just a reminder about our spring European tour – check the tour page for details. Here are the dates:

January’s free download is the demo version of “This Town”. It’s really a skeletal sketch of what eventually ended up on the “Burnt Toast & Offerings” album – no background vocals, no concertina or pennywhistle – but it was the template.

2010 was a very eventful year for me, and one of the biggest events was the devastating flood that hit Nashville on May 1 (here’s a blog entry I wrote the following week). I have never sung this song since without thinking of that day.