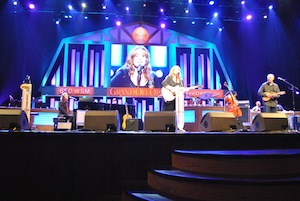 You don’t think it’s going to be as big a deal as it turns out to be. I wasn’t raised on the Grand Ole Opry – in the suburbs of New York City it was as unknown as grits or turnip greens. But I did fall in love with country music as a teenager, thanks to Gram Parsons and other interlopers from the hippie country-rock era, and I fell hard. I bought every Merle Haggard and George Jones record I could find in Boulder, Colorado, where my mother and I moved when I was 13. I studied Dolly Parton’s songs, the catch in Tammy Wynette’s voice, the deep soulful sob of Patsy Cline. Emmylou Harris was the gateway drug – she made it hip to be a country singer. And country music wasn’t that far from the folk music I grew up listening to and loving. It was musically simple, but not simplistic. It was about the stories. It was about everyman, and everywoman. Their fears, their failings, their sins, their joy, their sorrow.

After moving to Nashville 25 years ago this August, I made my solo debut at the Grand Ole Opry last night. I didn’t think it would hit me so hard. I didn’t expect to be so nervous backstage, talking to Buck and Sharon White just before I walked into the spotlight. But you stand on that sacred circle of wood where Hank Williams and Johnny Cash and Loretta Lynn and Willie Nelson and Patsy Cline and so many, many others have stood, and you can’t help but feel the eyes of all of those legends on you. Ghosts and heroes. And the thing that saves you, just like it did them, is a song. You grab on to the lyric, the melody – the story – and you sing it. Last night I sang one about a middle-aged woman who’s worried that her willful daughter will follow in her own ill-advised footsteps. And then I sang another one about a man and a woman who have somehow drifted so far apart that they’re complete strangers to one another. Country songs. Folk songs. Just songs. It was a night I won’t forget, and it was a very big deal.