Fifty years ago today, Medgar Evers was gunned down in his own driveway, within earshot of his wife and three children. As a very young child, I experienced this event, and the ones that followed like a recurring nightmare (Kennedy, King, another Kennedy), mainly through the prism of my parents’ response. My mother cried in broad daylight. My father raged. He was angrier than I’d ever seen him. It was scary, and my first indication that the larger world didn’t necessarily resemble our little haven of surburbia in Pelham, New York.

Later on, my life briefly intersected with the Evers family. Mrs. Evers brought her children to Pelham and began working with my father, a writer, on her memoir, later published under the title “For Us, The Living”. I was too young to fully comprehend her grief, and that of her children, but the youngest boy, Van, was about my age and I was happy to have a new person my age to play with. My chief memory of that time was making a snowman with Van in our front yard. I was amazed that none of the Evers kids had seen snow before – living in Mississippi seemed as exotic as living in France to me. We never talked about his father, that I can recall – we talked about the stuff kids talk about. We talked around it, probably. 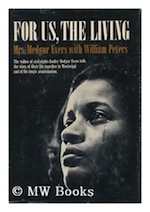 This past January, on the day of President Obama’s second inauguration, I was driving through southern Alabama, coming home from a series of shows. I heard Mrs. Evers (now Mrs. Evers-Williams) deliver the invocation. Her deep, powerful voice came through my car speakers and took me straight back to Pelham in the 1960s. I thought about what southern Alabama would have looked like back then. I thought about the fact that Mrs. Evers had lived through a horror most of us couldn’t imagine, and now here she was fifty years on, playing a major role in the inauguration of the first African-American US president. The second inauguration, which somehow, for many of us, seemed even more significant than the first. And here I was, driving through the Deep South, a place that had seemed so remote to me as a child, so different from where I grew up; and now it feels like my back yard.

Everything changes; everything stays the same. That’s a line from “Idlewild”, a song I wrote about my parents, Medgar Evers, JFK, the men on the moon – the zeitgeist of the 1960s through the eyes of an omniscient child (which I wasn’t, but that’s where creative license comes in). And it’s true: so much has changed, and so much has not – not really. Racism lives, as does sexism and several newly named (but not new) -isms. But I’m an optimist at heart. I can’t help but look back at that day in 1963 and think that we did, despite how it seemed during the decade that followed, wake up. I wish I could talk to Van Evers again and see what he thinks. We never talked about it back then.